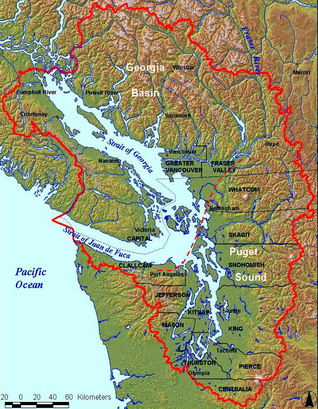 Although only settled in the 1800s, southern Vancouver Island has been inhabited since, archaeologists say, at least 9,000 BC (or for 11,000 years). Victoria, in fact, is built on the traditional land of the Coast Salish, where they lived and thrived for thousands of years before the arrival of European colonists.

As you prepare for your whale watching experience, it’s important to keep in mind that First Nations peoples have lived on this coast for a very long time and are still here even today. We thought we would share a few interesting facts about their society, culture, art and way of life so you can learn a bit more about our beautiful part of the world.

What does “Coast Salish” mean?

“Coast Salish” does not refer to a single tribe or nation. It relates to linguistics, as a branch of the Salish language spoken by the coastal tribes of the Pacific Northwest. As such, the Coast Salish actually are many different tribes and nations and all speak different, albeit linguistically related, languages.

In the Victoria area, they are called Songhees. Their traditional language is called “Lekwungen”, and you can find a blessing in that language on a mural at the Ogden Point breakwater.

Traditional Coast Salish tribes have an interesting social structure that is different from other Pacific Northwest First Nations. While a lot of hunter-gatherer societies were matrilineal (husband moves to his wife’s home), the Coast Salish were patrilineal. The wife moved to the husband’s village and your father determined your rank in society.

Contrary to what some people believe, these First Nations were not free of social classes. Communities usually had three classes: upper, lower and slaves. The Coast Salish were particularly hierarchical and power was related to ancestry, kinship, resource management and knowledge of nature and the spirits.

They linked with other tribes mostly through marriage, but also through trade. Groups living within the same watershed were particularly connected.

The Coast Salish had a well-developed culture based on the natural world and the change of seasons. Their vast knowledge is passed through storytelling and ritual. One of the most interesting developments of their culture is called the “13 moons system”, whereby they would control their resources and manage their religious life.

The Coast Salish tribes differed in stories and myths as much as they differed in languages, but some similarities exist. The salmon, for example, is often the most sacred of animals. They also considered the Western Red Cedar as sacred, as it was a source of materials for many necessities of life: canoes, longhouses, clothing, tools and basketry.

The Coast Salish were mostly sedentary, with a permanent winter village and temporary summer camps meant for food gathering. The most important ceremonies happened between November and March, when there was time for such things. The summers were too busy hunting and gathering food.

Their diet was based on fish and shellfish, abundant in the waters of the Straight of Georgia. In the summer, they would complement it with produce from grasslands, mostly camas. They also foraged for nuts and berries, developing unique harvesting techniques.

The Coast Salish people excel still today at fishing. During the early settlement, commercial fisheries would often employ them, as they were effective at catching fish.

The Coast Salish also practiced the potlatch, an important social ceremony that functioned to strengthen inter-tribal relationships, to distribute wealth along the territory and to confirm the power of headmen (leaders of villages and groups). This practice still goes on today.

The Coast Salish still have an important presence in the Victoria area. Everywhere testaments to their use of this land still exist: in names of towns and rivers and bays, in totem poles and houses and archeological sites. They knew of the majesty of the whales for millennia before Europeans came along, and now you can discover it for yourself!