Ruffles: The Iconic Orca in the Pacific Northwest 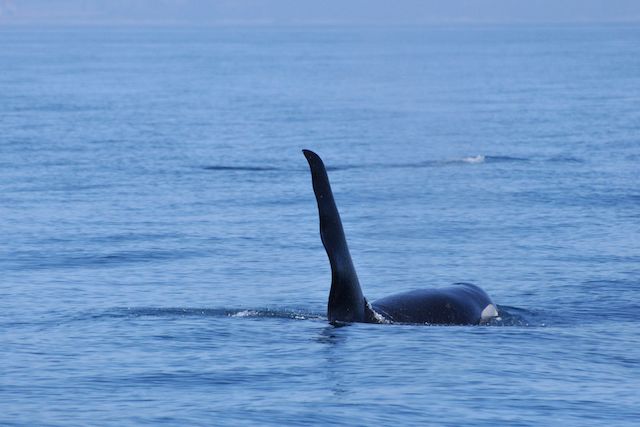 Even though he is now deceased, Ruffles remains one of the most recognizable killer whales in the Pacific Northwest. Known for his 6-foot tall, ruffled-edge dorsal fin, he was the patriarch of J Pod, one of the three pods that make up the endangered southern resident killer whale community.

Ruffles lived to the ripe old age of 60, which is well beyond the average life expectancy for killer whales. Males usually only live to the age of 30, so Ruffles lived an exceptionally long life! He even managed to escape death or capture at the hands of whale hunters in Penn Cove in 1970—the infamous day when 4 or 5 orcas drowned and 7 were captured and delivered to marine parks. Ruffles was the oldest known male killer whale in the world, and fathered at least 7 calves in all three pods, J, K and L.

Because he had such a unique appearance, Ruffles, or J1 as he is known to scientists, was the first whale to be recorded in the photo identification catalogue created by the Center for Whale Research in the 1970s. Updated annually, the catalogue now includes the entire southern resident population—25 in J Pod, 20 in K Pod and 42 in L Pod—and provides researchers with significant information on population dynamics, demography and conservation.

Ruffles frequently traveled alongside Granny, J Pod’s 100-year-old matriarch, but he hasn’t been seen since November 21, 2010. He was officially listed as missing in April 2011 and has since been declared dead. The oldest remaining male in the southern resident population is believed to be L41, who was born in 1977.